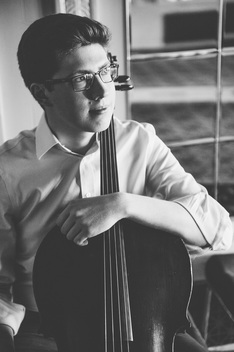 In the summer, Austin has attended the Mainly Mozart Festival in San Diego, the Verbier Festival in Switzerland, the Kronberg Academy in Germany, the Aspen Music Festival and School, Music in the Vineyards in Napa, California, the Perlman Music Program, the Academie International de Music de Montpellier in France, the Credo Chamber Music Festival, and the Meadowmount School of Music.

Austin is a member of the faculty at the University of Indianapolis, where he is also the cellist of The Indianapolis Quartet, the university’s string quartet-in-residence. He is a board member of the Indianapolis Suzuki Academy and was previously an adjunct lecturer at Indiana University. Austin holds a Bachelor of Music degree from the Colburn School Conservatory of Music, where he studied with Ronald Leonard. His previous teachers include Richard Hirschl, Brinton Smith, Paul Katz, David Finckel, and Richard Aaron.